At last, the much awaited Samsung Galaxy S IV has finally been unveiled in an event in New York! Although, one would hardly be able to notice 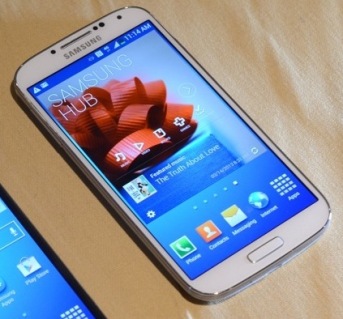 any difference between it’s predecssor the Galaxy S3, the real change lies ‘within’ this spectacular device.

The Samsung Galaxy S 4 is powered by a thumping eight core 1.6 GHz processor or a 1.9GHz dual-core processor. Moreover, it features a larger 5 inch SUPER AMOLED screen that boasts a crispy 1080p display at 441 pixels per inch ratio and protected by Gorilla Glass 3. 2 GB of RAM is included and the device will be available in 16, 32 and 64 GB Storage choices. Connectivity includes WiFi, NFC, S Beam, Bluetooth 4.0 and an Infrared port as well.

Despite running the latest version of Android 4.2.2, the most exciting components are the Samsung specific applications. The ‘Air View’ feature for instance allows you to hover your finger over certain pages (such as E-Mail) and navigate without having to actually change the screen. As expected the ‘Smart Scroll’ and ‘Smart Pause’ feature equip this mind-blowing smartphone wit intelligence like never before. Smart Scroll will be able to recognize your eye/face movement and scroll the page itself without you having to touch the screen. Smart Pause, on the other hand will automatically pause videos when you look away and start them when you turn back to the screen. Whats more, you can start and stop songs by just a wave of your hand.

The Galaxy S4’s cameras too, have been updated.  Equipped with a rear 13-Megapixel Full-HD and a front-facing 2 Megapixel camera, the S4 will prove to be a life-changer. New camera functionality includes the ability to use both the cameras simultaneously. That is, while you are video call-ing someone, you can choose to show yourself and what you are facing as well! The camera software too, has been upgraded to resemble features that were earlier found in Samsung’s Galaxy Camera.

As I earlier mentioned the key uniqueness lies the S4’s software capabilities, the S Health for example, is a complete fitness tracker. It has the ability to track trends in your health and using the phone’s inbuilt sensors it will compare your current surroundings with the your prevailing health conditions. A pedometer too, is packed into the S4 allowing you track the number of steps you’ve walked in a certain time period.

The Samsung Galaxy S4 will be available for order at the end of April.