Hotmail, was one of first to provide free e-mail access back in 1996 but after a decade and a half later, Microsoft has decided to rename or rather completely transform it’s Hotmail.com to Outlook.com. Don’t worry you wont be loosing your email address and emails. Microsoft decided to re-brand the e-mail service in order to regain it’s market share which was lost to Google’s gmail. 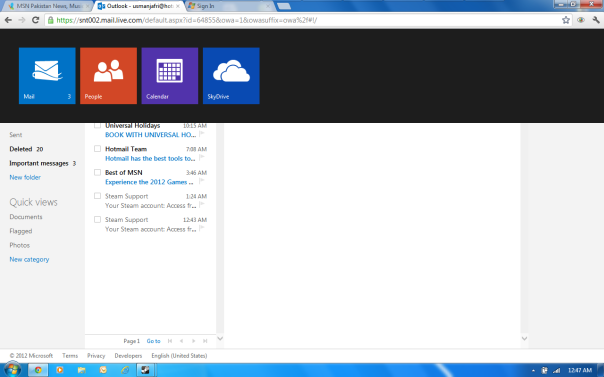 3. Word, Excel and Powerpoint documents can be edited online

Heading says it all.

The new Outlook.com is connect with Microsoft’s SkyDrive therefore leaving no space/size issue while uploading attachments.

The new Outlook.com will allow allow you to have Skype Video Valls with yours friends and family without actually having Skype installed. This feature will soon be implemented.

Outlook.com is extremely intelligent, it will now automatically detect emails such as articles, newsletters, notifications, etc and put them into separate folders. Photos and images can be viewed as slideshows

With the addition of new features and the pleasing clutter-less interface of Outlook.com it seems that Microsoft’s email will soon prove popular and better than the fast-rising gmail.